I don’t know about you, but I find that the older I get, the lower my boredom threshold sinks. And the shorter my attention span becomes….

Sorry, what was I saying?

Oh yes: boredom. Perhaps a jaded appetite is simply an inevitable consequence of having been shuffling around this mortal coil for a long time, which means that ‘been there, done that’ is a statement of fact rather than affected ennui.

Anyway, these musings – if you’re gracious enough to grant them such an elevated status – have been triggered this time around by the latest from ‘365 Days of Writing Prompts’:

“The Zone. Tell us about your favourite way to get lost in a simple activity – what’s it like when you’re ‘in the zone’?”

‘Simple activities’ are a comparatively recent experience for me. When I was working, a lot of what I did was, I suppose, quite complex by normal standards: analysing banks’ financial reports (and other works in the fantasy genre) and constructiing investment portfolios. Obviously, if you do that sort of thing for long enough it becomes second nature – if not straightforward.

Crucially, though, as I always used to say: ‘if you’re bored in this job, then it’s your own fault’.

I’ve retired from all that palaver now, but that doesn’t mean there isn’t plenty to keep the brain active: trying to get to grips with the cryptic crossword, looking up the long words that are sprinkled about in the Times Literary Supplement, tutting at the TV when a quiz contestant gives an answer of especially egregious stupidity and so forth. Not to mention trying to think of something to blether about here.

However, there’s no denying that I am sometimes compelled – by guilty conscience, if nothing else – to undertake simple activities of a routine nature that I would undoubtedly find crushingly tedious if I couldn’t apply some displacement therapy to them.

What I have discovered since I’ve had to do some ‘proper’ work – like cutting the grass or stacking firewood – is that I’m actually quite good at getting it done, repetitive though it is. I just put my head down and keep going until it’s finished.

But I couldn’t get through all those mundane tasks alone. The thought of having to trek up and down with a lawnmower for hours at a time without anything to distract me is just horrific. Quite simply, my favourite way of getting lost in a simple activity is by being plugged in to my iPod.

‘And what’s that like then?’ you may ask, if you’re sticking strictly to the script of today’s prompt.

Well, this is what it looks like from the outside:

Internally, the perspective is rather less panoramic – it’s heads down and try and mow in straight lines. It would be nice to think that I could make it look this pretty: 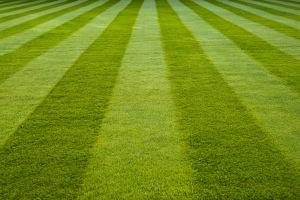 The steady puttering of my petrol-driven weapon of choice is what the external observer gets to hear. However, the internal soundtrack is inarguably superior.

So, what you see and hear from the outside is nothing like what’s going on in my head:

2 thoughts on “Zoned Out”