Ask a silly question and…you know how it goes.

‘What silly question?’ you may be wondering. No, it’s not the title of this post, but rather what inspired it: today’s instalment of ‘365 Days of Writing Prompts’:

“The normal. Is being ‘normal’ – whatever that means to you – a good thing or a bad thing? Neither?”

Let’s first assume that ‘normal’ is being used here in what is generally considered to be the pejorative sense – where normal means conforming to other people’s (‘society’s’) norms. You know the kind of thing – married with 2.4 children and a mortgage; commute to a  job where you wear a tie. In other words, what used to be described – from the vantage point of absolute knowledge that is conferred on all teenagers – as being ‘straight’.

From my experience, it is truly amazing how many of those people who are married with 2.4 children and a mortgage and commute to a job where they wear a tie are at great pains to tell whoever is willing to listen (or not, come to that) that they are most decidedly not ‘normal’.

Round it down to 2.0 children and I would have to count myself as normal – or at least I was when I had a job, a mortgage and a tie. As further evidence, I could also submit the following observations:

I must say, though, that while I gave every external appearance of being ‘just a normal guy’, I was sufficiently self-aware to know that there was a bit more to what you could call my ‘inner’ normal than this societal conformity. I always imagined that pretty much everybody else felt the same.

Personally, I felt no need to make a song and dance about my personal element of individuality. I used to get quite annoyed, though, by some people’s ostentatious denial of the plain fact that they were normal. I used to think of this as the ‘I’m-mad-me’ syndrome, as rightly pilloried in the Fast Show’s Colin Hunt, ‘office trolley’: 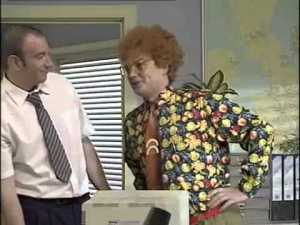 In one of my annual staff reviews – not so long ago, as a matter of fact – my line manager made the observation that I ‘had little time for the ‘soft’ side of office life’. Bloody right: my philosophy was more along the lines of ‘get in, get on, get out’. I really had neither the time nor the inclnation for non-normal activity in the working environment.

When I got home, it was a different thing, of course – but that itself is perfectly normal. Again, though, I didn’t feel the need to draw attention to my ‘non-normal’ conduct. Except when occasionally venturing forth in a tie-dye shirt. That doesn’t count, does it?

While researching this post (hard to believe, I know) I came across a huge variety of images which indicate that there is quite a market in the accoutrements of normality-denial: 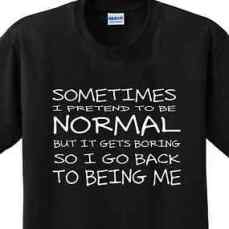 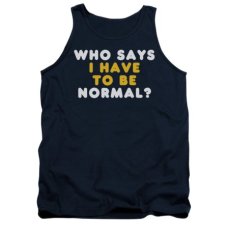 Yeah man…whatever. To borrow a phrase from Shakespeare, ‘the lady doth protest too much, methinks’.

I have some bad news for these guys: not wanting to be ‘normal’ is actually…..perfectly normal. Wanting to tell everyone about it, though? Not so much.

As it happens, I think my normal is a very good thing. Well, I like it, anyway.

And you don’t have to.

2 thoughts on “Is this normal?”