Browsing my news sources this morning, I happened to spot this little item on the Sky News website, under the headline “Prince ‘Fighting Flu After Emergency Landing'”: 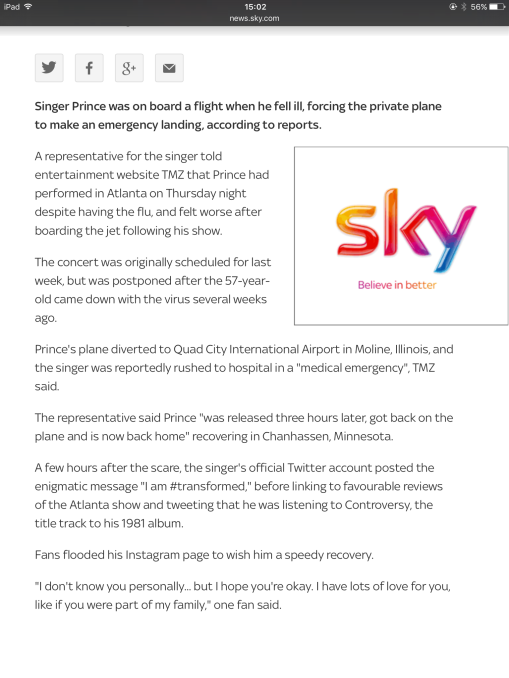 Now, I have nothing whatsoever against Prince, who is an accomplished and very interesting musician (57 though: who knew?) and I wish him a speedy recovery.

However, this was surely a classic case of what’s known on Twitter as #notnews. It’s the inevitable result of there sometimes being not enough ‘real’ news to fill the 24-hour rolling news websites that somehow we all managed to live without until the likes of CNN (“all news, all the time, until the end of the world”) came along. The headline could equally have read “Man feels bit peaky; goes home”.

As it happens, I’m running a bit of a cold myself at the moment. Fear not, I’ll be fine. In fact, I was pretty sure it was coming, given that Madame is just getting over the same thing, which she contracted from our grandson who came for a visit a couple of weeks ago witha streaming cold and left it as a souvenir. It was just a matter of time before it got round to me.

I felt I ought to bring it to your attention, though, since there’s obviously an appetite for this sort of information. But I don’t want to make a fuss, you understand, so I’m just going to issue this one-time statement:

Famed retiree the only deadhead in the hameau woke up this morning in his agreeable French country home with an unpleasant sore throat and a case of the sniffles, reports say.

The ailment, which is believed to have been contracted from his lovely wife, may have originated with another family member, who probably picked it up at school, as you do. It is not believed to be life-threatening.

Symptoms include a sore throat, runny nose and a general feeling of being bunged up in the sinus area. Mr Deadhead, who is 63 but claims to have a mental age of about 20, is understood to be self-medicating by taking a couple of Panadol Colds and Flu tablets every six hours.

A spokesman also revealed that later on today Mr Deadhead plans to ‘knock the thing on the head’ by chucking a couple of extra chillis in his curry and slugging down an extra strong Belgian beer. Then he intends to ‘see how he feels in the morning’.

The illness has already forced Mr Deadhead to cancel his plans to cut the grass this afternoon although, as it’s pissing down outside, that planned activity would have fallen foul of the weather in any case. Mr Deadhead stated that he still hopes to fulfil a planned public appearance at the big vide grenier in Confolens tomorrow, if he’s up to it. And if it’s not still bloody raining.

For the time being, Mr Deadhead is understood to be resting at home and listening to a Grateful Dead podcast.

No further bulletins will be issued.

(By the way, I checked the Quad City International Airport website: It doesn’t serve any international destinations. Unless you count Texas as a foreign country.)

2 thoughts on “My Sniffly Paracetamol Hell”