So what’s so special about the Grateful Dead? I’m by no means a natural evangelist, but a bit of background explanation might help.

The bus came by and I got on

Some time during the summer of 1990 I spotted an advertisement in a Sunday paper. The Grateful Dead on tour in Europe, playing Wembley Arena in October. Oh, the Grateful Dead, were they still going? I decided to go along, largely out of curiosity really, just to see if they would play anything recognisable from ‘American Beauty’, the only album of theirs that I had ever owned. Nostalgia time. One last hurrah for the days of my youth.

October 30th arrived. I got to the venue just a few minutes before showtime according to the ticket. Suddenly, a huge roar from inside. I dived through the nearest entrance and took in the scene. Above the stage an immense lighting rig was throwing green and purple beams onto – hey, there’s a lot of them. There was the great Jerry himself, so that must be Bob centre-stage and Phil on bass; did I know about the two drummers? I hadn’t been aware of the two keyboard players. No matter. They opened with ‘Jack Straw’, which I had heard before. 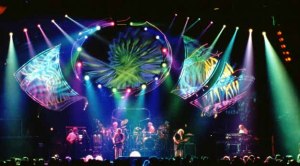 Didn’t know that next one (it was ‘Bertha’). Likewise, no matter. The music took over. There was nothing else I recognised, apart from Dylan’s ‘Queen Jane Approximately’, but that didn’t matter either. This was fun: no, it was better than fun, it was great.

About halfway through the second set I finally got it. The formalities of the basic song (‘Terrapin Station’, I later discovered) had been left far behind, and most of the players seemed to be off doing their own thing around the last vestiges of the original chord structure. Then – don’t ask me how – it all suddenly gelled, everything fell into place and they were together, all driving off in the same, but a new, direction.

I discovered some years later that this magic moment is felt by all who become deadheads and is commonly described as ‘the affinity click.’

The next day was, in the musical sense, the first day of the rest of my life. I bought more Dead albums as I let the dust settle on my old collection. I scoured shops for books about the group. I was hooked. I was a Deadhead, and I have been ever since.

However, having made the connection, I feed my habit by listening to concert recordings. Although my direct experience is limited, I know what it’s like and these live recordings lay it all out again for me. As well as all the CDs, I’ve downloaded over 900 shows – and I haven’t listened to all of them yet (and there are still more I haven’t got round to).

So much Dead, so little time.

This is a version of my first song – Jack Straw – from a legendary open air show in 1972. Please take the time to watch and listen: it will tell you all you need to know about the Dead – and the deadheads: