“When faced with confrontation do you head for the hills or walk straight in? Was there ever a time you wished you’d had the opposite reaction?”

This is only tangentially about confrontation (it’s only a prompt,though, isn’t it?), but today I’m going to tell you about the time I heckled Led Zeppelin.

Bet that got your attention.

Now, I love Led Zeppelin and, as I’ve written elsewhere on this blog, the first time I heard them was one of the defining moments in the development of my musical tastes.

But, as I shall here explain, there was a time when they got right up my nose.

At the beginning of the seventies, Led Zeppelin were huge, playing to 50,000-plus stadium crowds around the world. However for a while they stopped touring and then made a sort of comeback with a series of smaller gigs at British universities, including my own alma mater, the University of Kent at Canterbury. This event took place (I am reminded by ledzeppelin.com) on March 10th 1971. I distinctly remember the red wavy lines on the ticket – although I had forgotten that it cost all of twelve bob. 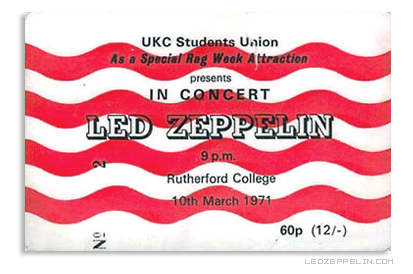 As well as the picture of the ticket, the official website also has a reproduction of a review of the show from the student newspaper. I don’t know who wrote it but it’s pretty accurate, particularly as regards the audience’s lukewarm initial reception.

However, I’m not at all convinced that the reason we were so ‘frigid’, as we were so felicitously described afterwards, was any shortfall in standards of musicianship. Rather – well, in my case certainly – it was a consequence of a couple of what can only be described as attitudinal faux pas committed by the group before they even started.

The first came as hundreds of us waited patiently outside the Sports Hall for the doors of be opened. It was quite possibly raining. What I do remember quite clearly, though, is the sight of Robert Plant sweeping past the queue sitting in the back of a Rolls Royce. This did not impress the Levellers among us and there was much muttering of phrases like ‘sell out’.

The Sports Hall was basically a large box and the temporary stage was set up in the middle of one wall. This meant that the band somehow had to get to it from the door in the corner, a distance of no more than fifty feet: not exactly an onerous or danger-strewn passage. So there was an audible gasp, followed swiftly by hoots of derision, when this door opened and Led Zeppelin were escorted to the stage by four bouncers, tuxedos and all, straight out of central casting.

Being charitable, I think they immediately realised that this was a monumental misjudgement of early-seventies student demographics. Plant, having been delivered to the stage without incident, tried to retrieve the situation by swinging a kick at one of the escorts as he launched into ‘The Immigrant Song’ and they marched expressionlessly on towards the door on the other side of the stage.

The damage had been done, though, and a large part of the audience had been lost before a note was played. I mean, if this doesn’t get you on your feet, what will?

As the student paper review goes on to say, most of the following two hours was a stand-off between the sulky crowd and the increasingly desperate-to-please group and towards the end Robert Plant did indeed deliver a homily about how nervous they were and how tough it was being the biggest rock band on the planet. Bless.

What isn’t in the report, though, is the fact that during this little lecture one of the other group members chipped in with an apologetic giggle and the comment ‘We’re all on mandies’.

For the uninitiated, ‘mandies’ have nothing to do with the apocryphal pisciphile groupie forever associated with Led Zeppelin, but is short for Mandrax, one of the ‘downers’ – or sedatives – of choice among the pharmaceutical-consuming classes of the era.

I still don’t know why, and it’s entirely out of character, but I immediately shouted out ‘when your conscience hits, you knock it back with pills’. As hardly any of you will know, this is a line from the song ‘Living, Loving Maid’ which features on the Led Zeppelin 2 album. Not bad for an instant response, I’ve always thought, being both germane and erudite.

I don’t think they heard me, though.

One thought on “Right back at you, Robert Plant”