To be honest, I was entirely ignorant of the concept of the bucket list until I saw the film of the same name in 2007. While I enjoyed the movie, I never thought seriously about compiling my own bucket list, so to write about the eleventh item on it, as per today’s installment of the 365 Days of Writing Prompts, poses quite a testing ontological challenge. As does – to an unsurmountable extent – titling the post, as per their suggestion, ‘Kick it‘. Not happening.

I must say that the idea of a bucket list holds a lot more innate appeal than a list of New Year resolutions, which I grumped about in characteristically curmudgeonly fashion yesterday. For a start, it is a matter of aspiration rather than prescription, so consists of things that you might actually want to do rather than what you have probably been pressurized into believing that you ought to do.

But still I have no bucket list. I have no shortage of things that I have done or seen that I would like to do again, but that is neither the object of the exercise nor something I would care to expand on in this forum.

As ever in such circumstances (and as with yesterday’s resolutions), I therefore turned to the internet for inspiration. Other search engines are available.

There is a website – well of course there is – on which you can post your own bucket list and find inspiration from the lists of others of like mind. Helpfully, there is also a list of the most popular ‘Life Goals’ (yes, it’s American). You can even use a ‘Popular Life Goals’ template containing a list of the most commonly-found items. It seems that even personal ambition is now available off the shelf.

Of course I shouldn’t mock. Such a thing is, no doubt, very helpful for people with a severe shortage of imagination. As such, it could have been made for me – and for the purposes of this post, it has been, for I shall resort to using it.

The first thing you notice is that the number of goals that you might like to have a shot at sometime is much more extensive than the shallow gene pool of New Year resolutions. On the one hand, this makes it inherently more interesting, but on the other means that you’re rather spoilt for choice.

Indeed, the aforementioned template has no less than 25 sub-categories. In alphabetical order these run from Adventure to Travel. Perhaps not surprisingly, these two have the most extensive to-do lists, with the exception of ‘Learning’, although as the 11th item on that particular list is ‘learn to snowboard’ we’ll just move on quickly.

I failed miserably to derive much inspiration from some of the ambitions that appeared in the lesser categories. One thing I could never be accused of is lacking awareness of my own limitations, so ‘building a log cabin in the mountains’ would be a bit of a stretch. Nor do I have any desire to form a prayer group, get a tattoo or join an online dating service. Though I can’t help wondering whether anyone has ever managed to achieve all three on the same day.

So really it comes back to Adventure and/or Travel. As to the latter, when I counted them up, I found that I had already been to well over half of the places up there. As it happens, #11 on that particular list is ‘See the aurora borealis’ and I must admit that would be nice. However, I harbour no ambition to earn 1,000,000 travel miles  (it wouldn’t surprise me if I already had, over the years), or to visit all 50 US states. On that one, by my reckoning I’m just over halfway there, but I can’t envisage making a special trip just to tick off Arkansas.

Adventure it is then.

This particular list contains fourteen items, of which the final three are white water rafting (no) and to be a contestant on either The Amazing Race or Survivor. We can safely ignore those, which means that the 11th item on my (adopted) bucket list is what this is all leading up to. See, I told you these things aren’t just thrown together.

I take some solace from the fact that I have seen dolphins. I even have the photographs to prove it, and I reproduce one below for your viewing pleasure.

I have many more pictures of splashes of water where a dolphin had just been. There’s a metaphor in there somewhere. 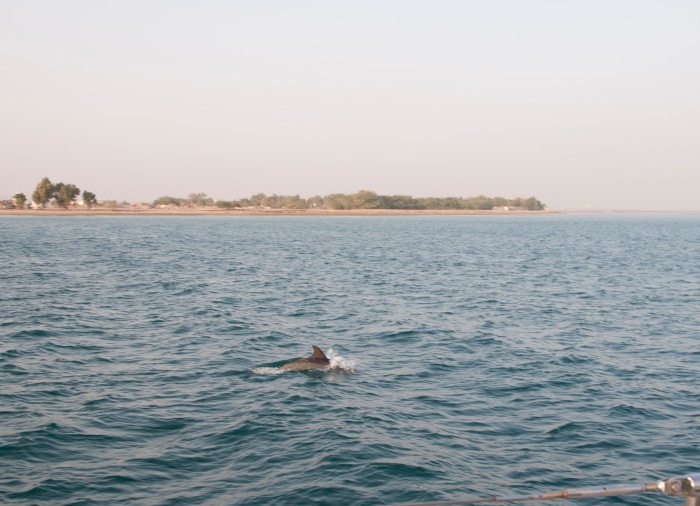