So, have you missed me? It’s been almost a fortnight since my last post.

I blame the good weather. Not that I have any objection to seeing the sun shine, but it does bring with it certain time-consuming responsibilities in the grass-cutting department. Although, as a happy update to my earlier post, I do seem to have got my new WMD well tamed.

But what I was really waiting for was a Daily Prompt I could work with, and finally it arrived. With the unpromising title of “If I had a hammer”, it demanded to know what practical skill would I like to have that I don’t have already.

You could describe that as a blank canvas.

They offered a few options, but I realised many years ago that my role in life is to write cheques for people who have these and similar skills. And believe me, in the 10 year renovation exercise on Brokedown Palace, I’ve had plenty of practice.

Absolutely nothing practical appeals. I am not made – either physically or mentally – for what could be described as the artisan trades. Although let’s be very clear that in describing them as such I mean absolutely no disrespect to their practitioners. Quite the contrary: I admire the abilities and the craftsmanship that they bring to bear on their chosen profession, Admire, but not envy, because I have no desire to try to emulate them. 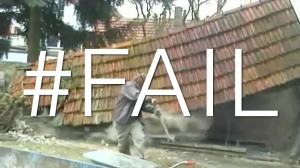 The truth is, I’m a bit too fastidious for all this sort of thing. And inept. And clumsy. Have I told you about me and flat-pack furniture?

Just consider what’s involved in some of these useful and noble activities and it’s easy to see how they wouldn’t suit me – and I certainly wouldn’t suit them. Let’s begin with the examples taht were offered in the Prompt:

Some of the stuff they didn’t mention specifically is even worse:

Have I missed anything? And if I have, how would I know? At least I don’t pretend to be an expert in these matters.

I’m right there with Adam Smith when it comes to singing the praises of the division of labour. Even Karl Marx acknowledged the difference betwen ‘workers by hand and by brain’. And have you ever read anything about the father of communism turning his hand to anything practical (apart from his parlour-maid): like changing a lightbulb for instance? At least I can do that.

Change a lightbulb, I mean.